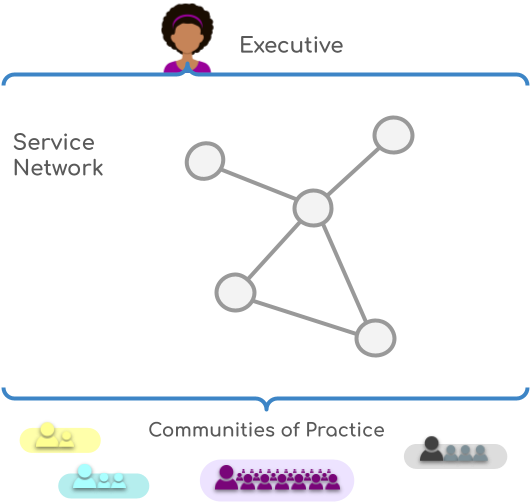 The Organised Services Operating Model (OSOM) is a template operating model to help organisations adopt a service-based approach. This is in opposition to a functional model, where capabilities are grouped by skills and ownership of the delivery to users is an endeavour shared between those functions.

The operating model has evolved by encouraging a common set of good behaviours at multiple organisations and discovering an organisational design and supporting processes that occur as a consequence.

The key components of OSOM are an executive capability that provides oversight & governance and a network of services that progress through a simple service lifecycle compatible with the Government Digital Service's service manual.

OSOM is a template operating model. Each organisation is different, and few organisations would be directly mappable onto OSOM directly. Instead, it forms a general approach that should be carefully adapted as needed to the organisation.

The key to adapting an operating model for any organisation is to be aware of the trade-offs being made with each compromise, both positive and negative. That way, governance can be established to balance the negative consequences, and full advantage can be taken of positive consequences.

The OSOM executive governs the network of services and holds the managers of those services to account through various mechanisms documented in terms of reference.

The executive also has a role in advocating and monitoring the adoption of guides to better decisions throughout the organisation, which provides a collection of 40 universally useful patterns of behaviour that should be encouraged wherever possible.

OSOM services address the needs of users. For any given service, the users may be external to the organisation, internal, or a mixture of both.

Each service is built & operated by a Service Manager, who is accountable for the service and the team required in all its lifecycle phases - from discovery until its eventual retirement.